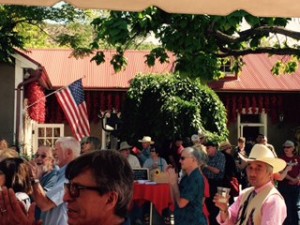 Congratulations to Rancho de Chimayo on their 50 Years Celebration!

On behalf of the board of directors and members of the New Mexico Restaurant Association, I would like to congratulate Florence Jaramillo and her staff for 50 years of service in the restaurant industry in the land of enchantment.

I was a very young child when I started to go to Chimayo regularly. In fact, I might have been at Rancho de Chimayo (RdC) that very first year. You see, my father was a high school buddy with Arturo Jaramillo, one of the founders of RdC along with his then wife, Florence Jaramillo. My parents would pack us in our camper and we would spend the weekend camping under the shade trees out in front of the restaurant. My dad can remember having to bring his own liquor before they had a liquor license (that’s back when BYOB was still legal in NM). 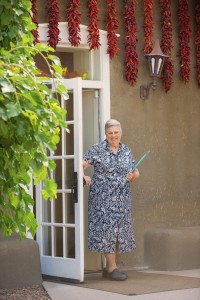 Florence, or “Mrs. J” as her staff calls her, has been an avid advocate of the industry and every year she would go to Washington, DC and go toe-to-toe with every representative and senator New Mexico has sent to DC since the early 1980’s. She inspired me to get involved with the New Mexico Restaurant Association when I first joined; actually she probably made me become a member. The first time I saw her in action in DC, I was awe struck. I wanted to be just like her and take on the government on behalf of restaurants in New Mexico. We all owe her for representing us with backbone and integrity for these many years. 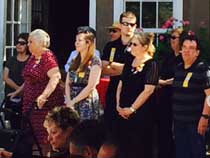 Florence has had a position on both the NMRA and NRA board of directors and many other boards as well. In 1987 Florence received the highest honor the New Mexico Restaurant Association bestows on a restaurant owner, the Restaurateur of the Year, the National Restaurant Association followed with their Lifetime Achievement Award.

If you have never been to RdC, picture a quintessential New Mexican hacienda as a destination restaurant. You must travel 35 miles north of Santa Fe up a winding road that reminds one of scenes from Road Runner and Wile E. Coyote cartoons. It’s actually a breath-taking drive through cottonwood trees and Indian reservations. 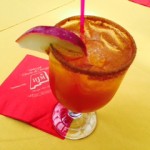 At the restaurant you are met by a hostess bedecked in a colorful fiesta skirt, smiling and waving you to a table on the three tiered patio. You must try a Chimayo Cocktail, a cinnamon rimmed glass with the local apple juice and tequila. The food is classic northern New Mexican, the best chile (my opinion) is the red and posole is served as an accompaniment like beans on the side of the plate.

Take some time to explore this treasure in the hills of northern New Mexico. Tell them the restaurant association sent you!