ADA Legal Free For All 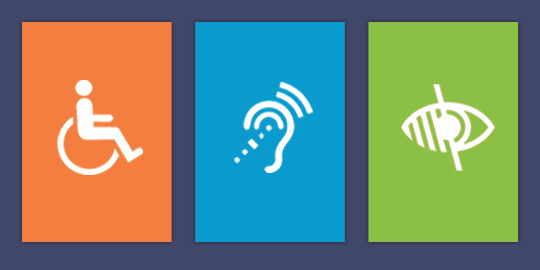 In 1990 when the Americans with Disabilities Act was passed no one was contemplating the technology boom that would be changing all aspects of our lives and the lives of those with disabilities. Now businesses are faced with lawsuits claiming everything from un-compliant gift cards to websites. Besides wheelchair ramps that may not be the exact incline, this ADA legal free-for-all climate now includes closed captioning, and dogs.

The Americans with Disabilities Act may have been well thought out in the 1990’s but now it’s a nightmare for anyone who has customers.

According to Angelo Amador the Executive Director of the Restaurant Law Center: “The U.S. Supreme Court declined to hear a case on the issue of Domino’s Pizza website. The case centers around a blind customer who claims a restaurant website did not provide adequate accommodations under the Americans with Disability Act (ADA), which prevented him from ordering online a pizza for delivery.

The issue is timely because many restaurant and other public-facing businesses are regularly faced with sue-and-settle tactics from certain attorneys. Angelo Amador told Fortune in an article published last week, that “there are many more instances of companies receiving demand letters, and that many agree to pay $10,000 or $20,000 or more to avoid going to court. He pointed out that the business community is especially frustrated over the absence of guidance from the Justice Department over how to provide accommodations under ADA. He noted that the Obama Administration had promised to issue rules on how companies can address the issue but the rules never materialized and the Trump Administration has cancelled the process established by its predecessors.

The Supreme Court’s refusal to hear the appeal means that the case heads back to Federal District Court for trial. The Association and the Restaurant Law Center will continue to remain engaged on this case as it begins a more lengthy trial process. The case in question is Robles v. Domino’s Pizza LLC.”

And if that wasn’t enough, the Albuquerque City Council just, December 2019, passed a law making it a crime to have a public TV on without closed captioning. (Of course crime is not a crime in Albuquerque but that’s another story.)

And in yet more news right at Christmas time…gift cards are the newest ADA lawsuit threat.

Last month, 33 class action lawsuits were filed in New York federal courts against retailers and restaurants. The argument? Businesses were violating the Americans with Disabilities Act (ADA) by not offering gift cards in braille. Since no federal court has yet ruled on this issue, the decision could impact gift card vendors just in time for the holidays.

And of course all of you know that pets are becoming a nightmare in restaurants because the ADA does not require any kind of certification for true service dogs so everyone with a perky pet wants to illegally pawn them off as a service animals so they can take them everywhere they go.

We support the tenets of the American with Disabilities Act and we encourage our members to comply with all of the “known” requirements and codes. We do not support lawyers making money off the backs of businesses without giving them recourse to cure the problem before slapping them with lawsuits and settlements. We suggest that the do-nothing congress take up ADA again and fix these lawsuit happy legal problems.This is a new world and we are all trying to keep up with technology, businesses are trying to keep up with all of the additional requirements on their business. The ADA was not meant to be a “gotcha” for legitimate businesses.