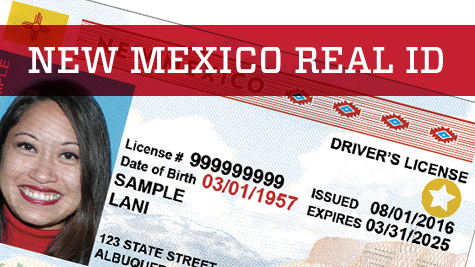 What Changes Are Being Made to NM Driver’s Licenses/IDs?

In November 2016 New Mexico began issuing two types of DL/IDs: Real ID-compliant and non-Real ID compliant. The term Driving Authorization Card (DAC) has been commonly used to refer to both a non-compliant DL and ID. New Mexicans were given the choice of which DL/ID type best suits their needs.

In 2019, Senate Bill 278 (SB278) was passed by the Legislature and signed into law by Governor Michelle Lujan-Grisham. SB278 makes several changes.

The name of the non-compliant DL and ID will change to Standard Driver’s License and Standard ID. In addition to the name change, other physical features of the cards will be apparent:

How Can the Standard DL/ID Be Used?

Under New Mexico law, Standard Licenses and Identification Cards must be accepted for all other identification purposes in New Mexico on the same terms as a Real ID credential. This includes transactions like cashing a check or obtaining state and local government services.

Will There Be Any Changes to the REAL ID-Compliant DLs/IDs?

No. The application process for and card layout of REAL ID-compliant cards are unchanged.

When Will the SB278 DL/ID Changes Go Into Effect?

Who Can I Call If I Have Any Questions? 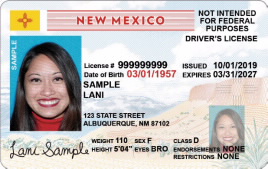 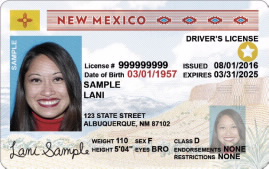