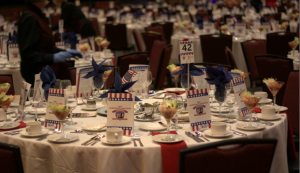 The highest honor a restaurateur can achieve in New Mexico is Restaurateur of the Year. New Mexico is home to such a great variety of restaurants that it is difficult to choose a winner each year. Brian Bailey from Domino’s Team Bailey was recognized as the 2017 restaurateur of the year. Domino’s Team Bailey has locations across the state, and gives back to the community through pizza donations, over $27,000 in monetary donations, and volunteer work.

The Chef of the Year award is given to recognize chefs who provide excellent cuisine as well as excellent service. Marc Quinones of Hotel Andaluz was honored as Chef of the Year for 2017. Chef Marc is being recognized for his consistent promotion of New Mexico cuisine throughout the state and country as well as his devotion to “making magic” through local ingredients in the kitchen.

The Manager of the Year recognizes outstanding managers who are the team leaders in a restaurant establishment. This year’s recipient is Andy Twomey of the Black Mesa Coffee Company. Twomey was recognized for his dedication to employee success and industry innovation.

Restaurants are strong supporters of the communities in which they reside. Nine out of ten restaurants contribute to a community service project or fundraiser on a regular basis. The Restaurant Neighbor Award honors a restaurant that is a good neighbor in their area and has had a significant impact on the community. This year’s recipients were Larry and Dorothy Rainosek from Frontier Restaurant and Golden Pride. Larry and Dorothy have been there for their communities of for over four decades in Albuquerque, supporting local organizations in numerous ways.

The New Mexico ProStart Program is a high school curriculum that teaches culinary, management and hospitality education in 36 high schools in New Mexico. Students completing the program have trained for over 400 hours and are well-equipped to enter the workforce in the hospitality industry. Cloudcroft High School was recognized as the winner for the management competition for the second year in a row. For the culinary competition, Santa Fe High School was recognized as the winner. The 2017 winner of the Hospitality Cup, the school with the best score combined in the culinary and management competitions, is Taos High School.

The 2017 ProStart Teacher of the year is Genevieve Wertz from Deming High School. Genevieve has done an exceptional job as a ProStart educator. Deming is a small school in a small community. But this small community has a big heart. That includes Genevieve Wertz and her students. Genevieve has been described as being a true inspiration to her students and coworkers. She is someone who has demonstrated time and time again that with her tremendous work ethic, positive attitude and amazing spirit there is absolutely nothing she cannot help her students to accomplish, even in her rural town. Genevieve built her ProStart program from the ground up, with incredibly limited resources, but even with all of that, her perseverance, commitment and drive have meant that since her ProStart team started, Genevieve has always had her teams finish in the top 3 of every competition they have been a part of.

Recipients of Hospitality Industry Education Foundation (HIEF) scholarships were also recognized at the dinner. HIEF awarded $14,000 in scholarships to nine students pursuing a career in hospitality this year.
Photos of the event, photos of the winners, and more details on the winners are available upon request to NMRA at 505-343-9848.

The New Mexico Restaurant Association’s mission is to empower the food and beverage industry by promoting and protecting common values and interests. It has more than 1,000 members in 111 cities all over New Mexico, who join together for meetings, seminars and the hospitality industry awards to honor the industry’s top achievers. It has actively represented and promoted the food service industry in New Mexico since 1946.