Stimulate your appetite with juicy facts and figures.

Served on the rocks or with a helping of heavy taxes on New Mexicans.

NMRA opposes legislation that would allow counties to impose additional liquor taxes if supported by a local option election. The liquor excise tax already collected is among the highest tax of its kind in the nation. New Mexico counties receive a generous portion of the funds collected from the state liquor excise tax.

Lowering the legal blood alcohol content (BAC) limit to .05 would turn responsible social drinkers into criminals and deter people from having a drink at a restaurant. Perhaps more importantly, it will not do much to reduce drunken driving deaths. A better focus for New Mexico would be to target hard-core drinkers on their 5th DUI charge. A 170-pound
man could hit .05 by consuming three beers or glasses of wine in an hour, and a 137-pound woman by consuming just two. 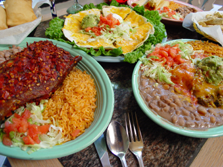 All entrees are served with a healthy portion of New Mexico Restaurant Association initiatives and legislative issues.

We support investing in tourism marketing to bring in new dollars, to create new jobs and to showcase our beautiful state. The New Mexico Tourism Department has clearly demonstrated that money spent on marketing New Mexico outside the state has huge benefits for the state’s economy. For every $1 spent in tourism advertising, we see $3 in state and local taxes and over $30 spent in local economies.

Prepared with the finest intentions, here’s the latest food for thought.

Because restaurants provide many first job opportunities (one in three Americans get their first job in restaurants), our industry is hardest hitwhen minimum wages increase. We must advocate for reasonable increases that will not place jobs and businesses in jeopardy. Minimum wage increases are especially difficult for small businesses to absorb. We ask that the legislature keep this in mind when considering an increase. Any changes to minimum wage should keep tipped wages, not omit them entirely

Activist groups often misleadingly point to the $2.13 tipped wage supplement and claim that tipped employees earn less than the minimum wage. This isn’t true: Tipped employees are guaranteed to earn at least the minimum wage and typically earn much more. Census Bureau data show that the average hourly wage for a restaurant employee earning tip income is $13.08, with top earners bringing in $24 an hour or more. Keep tipped jobs by supporting tipped wages.

Did you know this about know NM restaurateurs?

Serving members and the people of New Mexico since 1946

For a more in-depth or printable version of this menu, contact us at  communication@nmrestaurant.org.