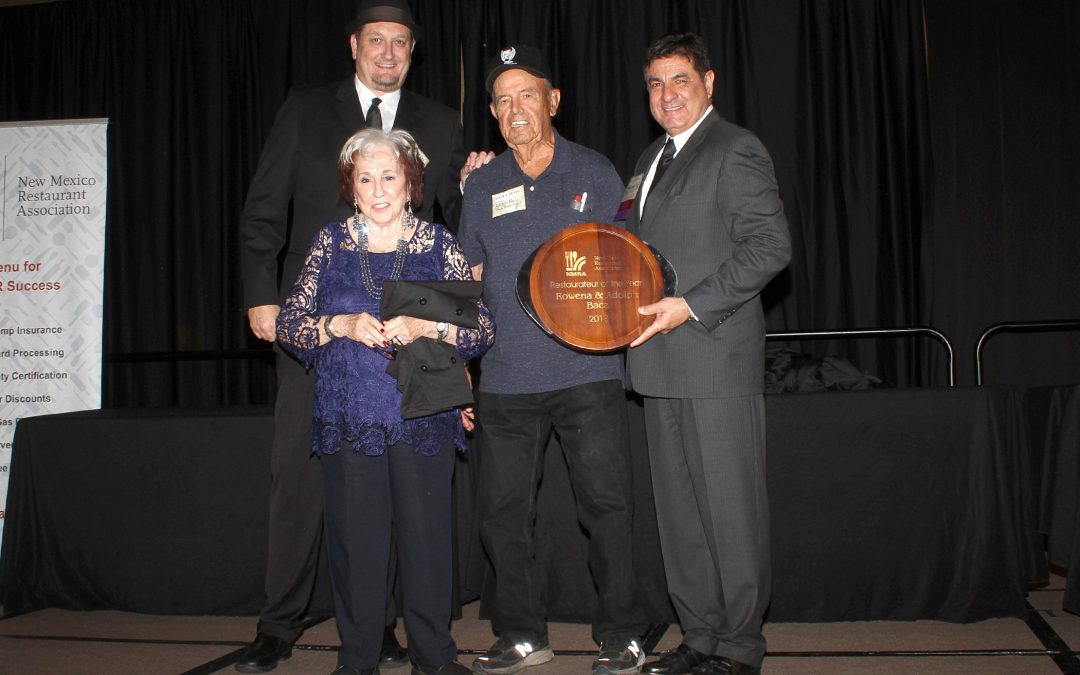 The New Mexico Restaurant Association is pleased to announce the winners of the 2018 Hospitality Industry Awards that took place on Monday, September 10th at Embassy Suites in Downtown Albuquerque. 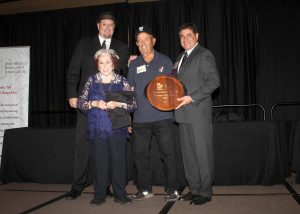 Rowena and Adolph Baca of The Owl Café in San Antonio, New Mexico took home the win for “Restaurateur of the Year”. This is the highest honor a restaurateur can achieve in New Mexico.

The Owl Bar & Café is a family legacy operating since 1945. They’ve received many awards for their historic restaurant as it has become quite the tourist destination, and has even been showcased on the Travel Channel, Food Network, and in many print publications. The heart of their operation is their employees, some of which have been with them for over 46 years and if you have visited the Owl Café, you’ve noticed dollar bills attached to the wall. The story behind these bills says a lot about the Baca Family. They don’t keep that money. Every year a few weeks before Christmas, they take down the money and donate to various charities such as NM Make-A-Wish Foundation, Carrie Tingley Children’s Hospital, NM Boys and Girls Ranches, and more.. To date, they have donated over $30,000 to the various charities. Click here for video. 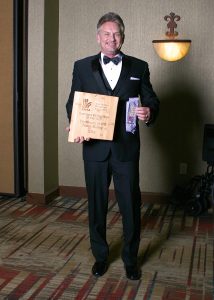 The Restaurant Neighbor Award  recognizes restaurants that are active supporters of their communities and make a positive contribution to the places where they live and work.  Their charitable events help big groups and individuals–like a Clovis area veteran with cancer, a Las Cruces mom in need of a transplant, and a Shiprock area child born with brain complications. 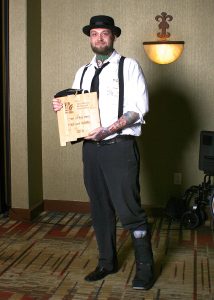 Chef Michael White of The Point Grill in Rio Rancho took home the win as Chef of the Year.

Chef Michael is a 15 year veteran of the industry and is being recognized for his passion for innovation, teaching, and developing culinary talents with the next generation of chefs, creating “The Kitchen Kids Inc.” charity that provides cooking classes and guided recipe instructions to children of all abilities. 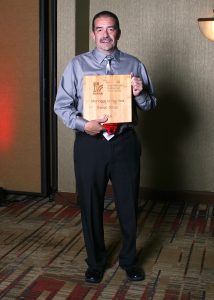 This year’s recipient for Manager of the Year was Steve Silva of Anaheim Jacks in Ruidoso.

Steve has been in the industry for over twenty years and was recognized for his dedication to employee success, industry innovation as well as giving back to the children of New Mexico and to the small town he calls home.

The winners mentioned above were nominated by the public and winners were selected by a committee of former Restaurateur of the Year Winners.

As a tongue-in-cheek nod to this year’s prohibition theme, social media votes were cast  for “New Mexico’s “Most Wanted” Distillery, Winery and Brewery of the Year.

The public voted for the following:

Three Rivers Brewery and Distillery in Farmington as the Most Wanted Distillery. 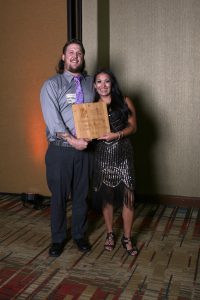 Three Rivers uses their own distillery products in fresh, homemade craft cocktails that really makes their in house spirits shine.  Their distillery lounge is one-of-a kind, using locally-sourced, recycled materials in its construction. Their fans on social media could not say enough about them and their votes came rolling in. See the video 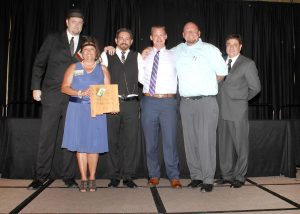 St. Clair’s has been a part of the New Mexico wine scene for over 30 years and has locations throughout New Mexico. Their wines are the foundation of the growth of the company and include locally owned and operated Bistros, a tasting room and wine bar. They pride themselves in being 100% New Mexico and our social media voters agreed that they were 100% incredible. 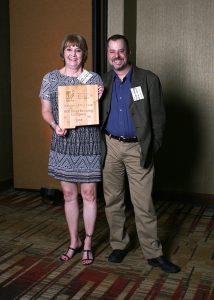 The public voted for Red River Brewing Company in Red River as the Brewery of the Year.

RRBC is relatively new to the industry, but have already created many jobs, new dining options for visitors, and have come a long way in helping their town become a destination for craft beer lovers. They happen to be the highest elevation brewery in New Mexico, and their water and clean mountain air blend together to make crisp, satisfying beer.

Many of the nominees generously donated their beer, wine, and spirits to the Hospitality Awards Cocktail Hour and to Wine Auction in which these donations were raffled off and 100% of the proceeds went back to the New Mexico ProStart program and the Hospitality Industry Education Foundation.

Congratulations to all the winners and the nominees!

The event began with awards for New Mexico’s ProStart Program. ProStart is a high school curriculum that teaches culinary, management and hospitality education in 34 high schools and over 1800 students in New Mexico. On March 5th, the New Mexico Restaurant Association hosted the 17th Annual ProStart Invitational.  15 New Mexico High Schools and over 100 students competed for over one million dollars in scholarships and a chance to represent our state at the National ProStart Invitational in Providence, Rhode Island.

The following winners were also recognized at the Hospitality Industry Awards: 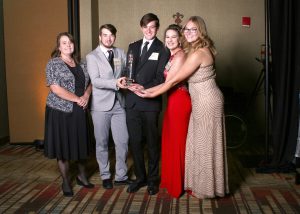 Cloudcroft High School was recognized as the winner for the management competition for the third year in a row. 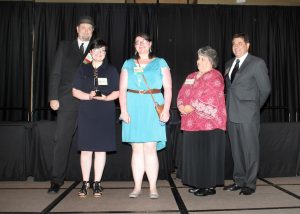 Deming High School was recognized as the culinary competition winner. 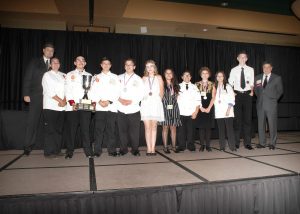 Taos High School took home the 2018 Hospitality Cup for the second year in a row. The Cup recognizes the school with the best score combined in the culinary and management competitions. 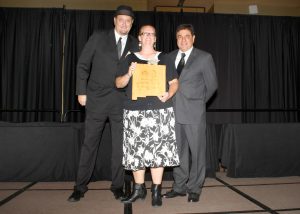 These students wouldn’t have been successful without a leader, their teacher. The 2018 ProStart Educator of the Year is Danielle Young from Atrisco Heritage Academy. Danielle has done an exceptional job as a ProStart educator. She has helped create Atrisco Heritage Academy’s culinary program as it has grown to be one of the best in the State. Danielle has built from the ground up the student-run café –which hosts dinner theater nights with the drama program. Thank you, Danielle, for all you do for tomorrow’s hospitality industry stars. 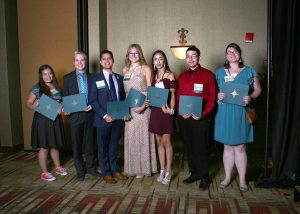 Recipients of Hospitality Industry Education Foundation (HIEF) scholarships were also recognized at the dinner. HIEF awarded $10,000 in scholarships to 10 students pursuing a career in hospitality this year.

Barreling toward the future

What people are saying about this year’s event:

“Tuesday afternoon, I stopped at the Owl Bar on the way back to Las Cruces for my Green Chile Cheeseburger.  Rowena Baca was showing off her plaque, tray or whatever that was for winning Restaurateur of the Year to some customers.  Ed and Linda Linderman walked in and joined me.   I told Rowena that we had been at the dinner, introduced Ed and Linda and offered our congratulations. She seemed very pleased.  I said that I know they gave you an apron as well but you better hide that or the servers will start gibing you tables!  She laughed and then 3 people came up and said they had been at the dinner and wanted to take a photo with Rowena.  One of the guys was a nominee for Chef of the Year but I could not understand his name or restaurant.  They all posed with Rowena and she held up her award and I took their picture.  It was a very nice moment.” Jerry from Double Eagle Mesilla

“It was so much fun and so nice to see so many people in the industry there from all over New Mexico!” Rozanna from the Albuquerque Journal

About the New Mexico Restaurant Association:

The New Mexico Restaurant Association’s mission is to empower the food and beverage industry by promoting and protecting common values and interests. It has more than 1,000 members in 111 cities all over New Mexico, who join together for meetings, seminars, and the hospitality industry to honor the industry’s top achievers. It has actively represented and promoted the food service industry in New Mexico since 1946. For more information on NMRA, visit www.nmrestaurants.org.