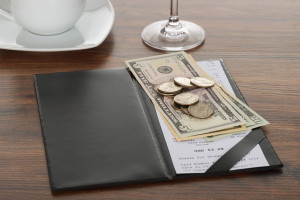 What is the difference between tips and service charges?

Tips:
• Are freely given to the server by the customer.
• Are the employee’s money! Outside of a legal tip pool the business has no control of that money.
• All tips must be reported by the server to the establishment for income reporting purposes.
• DO NOT COLLECT SALES TAX ON TIPS!

Service Charge:
• Any charge that is automatically applied to a bill and the customer doesn’t have the ability to choose whether to pay it or not.
• MUST COLLECT SALES TAX – This is where a lot of restaurants get into trouble with the Department of Revenue and IRS audits.
• Shall be considered revenue to the business.
• The business may keep all or a portion of a service charge, but must be accounted for like normal payroll would be. • Money given to an employee from a service charge cannot count toward a tip credit.

Confused about tipping? Join the club.

My father called me last week and told me his favorite restaurant had changed their tipping rules. He and his friends have been gathering monthly at their favorite Bernalillo eatery for the last 10 years. At the end of the meal, they used to be presented with the check split eight ways with gratuity added. However, this time they were told that the gratuity was not included because of some new federal law. So they had to figure out a 15% to 20% tip on each separate check, gather the money and make a confused payment. He called me complaining about the new practice, thinking my position at the New Mexico Restaurant Association could magically restore the restaurant’s previous practice. If only it were that easy!

Tipping has always been a bit of a mystery, but now a nuanced Internal Revenue Service rule can get restaurants in big trouble. If a tip is a voluntary payment, the money is considered a gratuity paid directly to the server. If it is a mandatory payment, (disclaimer on the menu – parties of six or more will have a gratuity added) then it is considered a charge for service to the business, is taxed as such, and does not belong to the server. With this ruling, the definition of “service charge” changes the way the IRS treats your tip. In my opinion, the IRS is trying to fix something that is not broken.

In practice, restaurants have allowed the service staff to keep the entire amount of the tip and/or service charge no matter if it is mandatory or voluntary. Rules have long been in place that require restaurants to help the government keep track of the tips and service charges received by servers and other tipped employees. Uncle Sam must have thought someone was being treated unfairly in this deal, so instituted the “fix”. To keep from getting in trouble, and to allow tips to flow directly to servers, most restaurants took the service charge off the menu and will let Uncle Sam fend for himself.

So what is the difference between tips and service charges? The IRS has four main criteria to determine if your payment is considered a tip or not.
1) The payment must be made free from compulsion.
2) The customer must have the unrestricted right to determine the amount.
3) The payment should not be the subject of negotiation or dictated by employer policy.
4) Generally, the customer has the right to determine who receives the payment. All the surrounding facts and circumstances must be considered.

The practice of tipping is clearly under fire in the United States. Many in the union movement despise tipping because the practice directly ties pay to performance. Extremist believe it is a plot to underpay workers, despite the fact that tipped employees are some of the highest paid employees in the restaurant industry. It’s really just a difference of what is considered acceptable. In the United States, servers rely on tips for most of their pay; In Europe and other countries, a service charge is added to a check and becomes a part of the taxable business income from which wages are paid.

As more restaurants come under fire for these traditional practices, I think we will see service charges being added to the menu, the check and the final bill. Tipping will no longer be a direct payment for good service but a cost of going out, and like Europe, these charges will be added, no matter how good or bad the service.

Under rules like the recent IRS Ruling, we may well see more restaurants add service charges to the bill and in the process eliminate the historical practice of tipping for good service. Is tipping really such a great wrong that the federal government needs to eliminate? Personally, I like our tradition of tipping for good service. I think it encourages people to be better customer service ambassadors. However, the federal government seems to think otherwise, and this appears to me to be a great example of creating a problem where none exits. How’s that for a tip.

Service Charge vs Tip: Can a Restaurant Charge a “Gratitude Fee”?

1. “Gratitude Fee”  – If this is the notice the owner puts on the menu, it is understandable why customers may be confused whether or not they have discretion to pay. In law, a “tip” is a gratuity given the server by a customer. The customer has the discretion if to give anything, and if he/she decides to leave some tip, the amount. The owner does not have to include a tip as part of gross receipts, nor pay any income tax (must pay their share of FICA tax) on any amount left by the customer. The server must include the amount left (unless the server shares some portion with others – under such circumstance, only the part he/she retains) as taxable income. On the other hand, under federal law a “service charge” is a mandatory payment the customer must pay as part of his/her bill for ordering a menu item. The customer should be made aware of this (e.g., stating this additional charge on the menu) so that when the customer orders, he/she is aware of the obligation to pay the additional amount.  The entire service charge, under federal law, becomes gross income to the restaurant. The owner has complete discretion to keep all of it (unless a state law says otherwise) or share part or all of it with servers or others. Under federal law, service charges are not treated as a “tip”, and no tip credit may be taken for any amount shared with servers.

2. Are Customers obligated to Pay the “Gratitude Fee”? – Likely yes if a legal determination is made that it is a “service charge”. However, the wording the owner uses, at the least, may confuse a customer if the obligation is mandatory or discretionary. Better (clearer) wording on the menu may be something like: “For tables with 8 or more, an automatic service fee of 15% will be charged. This fee is a mandatory payment as part of and in addition to the menu cost on your bill. If you decide to order, you are required to pay this additional charge.”

3. Approaches – As mentioned, if the customer clearly understands and has notice that this charge will be made, by placing an order with this knowledge, the legal approach is that management has made the customer an offer and by placing the order, the customer has accepted the offer under the circumstances presented. If the customer later refuses to pay the service charge, this in law should be treated no differently than a customer refusing to pay all of the charge for the food he/she orders as listed on the menu. One possible approach (must consider the “PR” impact) is to refuse the same group future service if they do not pay in advance or if they are reminded of the requirement before they order and they refuse, the owner may not want to serve them just as if they stated before they order that they will only pay a portion of the cost for an amount listed for a menu item.

Click Here for NRA PowerPoint on Tip Reporting and remember laws change, so check with your legal counsel before making changes.